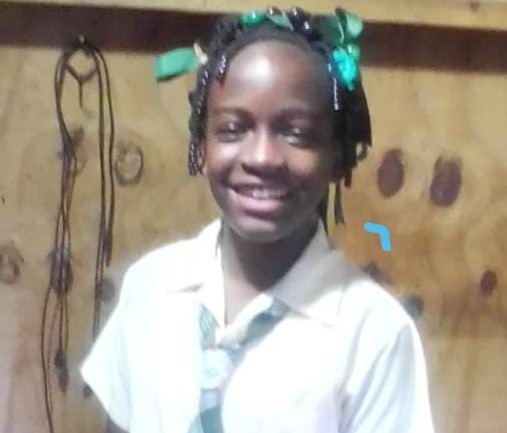 As the search for Kernisha Etienne, who was abducted from her home, enters day two, National Security and Home Affairs Minister Rayburn Blackmoore has promised his government will do everything possible to find the girl 12 years old.

According to police reports, on the evening of June 7, 2022, around 11:30 p.m., Etienne was abducted from his home by a mentally disturbed man.

During the offence, Kian Alexandre de Belles who was identified by the police as the kidnapper went to the home of his uncle, Laurent Joseph Bruno, and attacked him with a cutlass inflicting serious injuries to his head and face.

Afterwards, he abducted Etienne, 12, Bruno’s adopted daughter and disappeared with her into the bushes of Warner.

During the first day of the search, dozens of residents joined the police in searching for the minor and the attacker, but to no avail.

During a live interview with DBS public radio this morning, June 9, Blackmoore revealed that K-9 and a helicopter were among the assets to be used on the second day of the search for Etienne.

“I would like, on behalf of the government, to express our gratitude to the French government because, thanks to the help of the department of Martinique, we were able to obtain a helicopter yesterday at 4:25 p.m. to help with the search,” he said. declared.

“The helicopter left last night but is expected to return today, but we already have a trained dog searching some areas to find Kernisha.”

The parliamentary representative for Mahaut constituency has promised that the search for the 12-year-old girl will not end until she is found.

“I want to assure the public that this search will continue until this young child is found and returned to her natural habitat, which is her home. Our prayers continue to be with her family during this time, including her adoptive father who was attacked and is a patient at Dominica China Friendship Hospital, but we will not relent until she is found,” Blackmoore said.

Prime Minister Roosevelt Skerrit, who also spoke on Etienne’s kidnapping, said he had given the Minister of National Security full approval for all state resources necessary for the effort to search and rescue.

Skerrit, who is attending the IX Summit of the Americas in Los Angeles, Calif., thanked the many citizens who participate in search and rescue efforts.

“Even though I am outside the country, I follow events continuously. For me, this issue is an even higher priority than the Summit of the Americas, and so my attention turned to our Kernisha Etienne search and rescue efforts. I have great hope and I pray to God that she is found alive, so let’s keep praying and doing what we need to do as a nation,” the Prime Minister encouraged.

Meanwhile, the Minister of Youth Development and Empowerment, Youth at Risk, Gender, Elderly Safety and Dominicans with Disabilities, Dr. Adis King, expressed her condemnation of the act. kidnapping against Etienne.

“No child should experience such a heinous crime. This is a cowardly and despicable act and a horrific abuse of basic human dignity and human rights,” she said.

Dr. King said now more than ever, parents, family members and society at large need to speak out against such acts and help keep all children safe.

“My government is very concerned about the increase in cases of sexual abuse perpetrated against the girl child in Dominica and the number of cases of gender-based violence. We must all protect women and children from such offenses. We are committed back into policies and actions to address these issues and protect these vulnerable groups within our society.

She urged anyone in a position to help Etienne’s search and rescue mission to lend their support because “time is running out”.