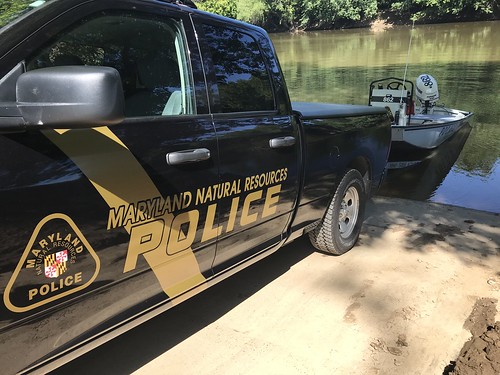 A Montgomery County man has been charged with unlawful possession of river herring and shad. At approximately 12:25 p.m. on May 14, officers on patrol in the Potomac River observed two men, one of whom was carrying several large bags. Police approached the man, identified as Xinpei Yu, 45, from Silver Spring; Yu dropped his bags and the two men fled in opposite directions. When officers retrieved the bags, they discovered 20 river herring and a hickory shad, both of which are catch-and-release fisheries. Police located the two individuals with the assistance of Montgomery County Police. Officers charged Yu and issued a subpoena in Montgomery County District Court at a later date. The maximum penalty for each offense is $1,000 and additional charges could be filed pending further investigation.

Six men are accused of illegally fishing for striped bass on Tilghman Island in Talbot County. On May 13, enforcement officers found six men fishing on the south side of Knapps Narrows Bridge, where numerous signs clearly stating “no trespassing” are posted. As officers approached the bridge, they observed five of the six men exiting the bridge, each holding fishing rods with lures used to catch striped bass. The sixth man was fishing on the west side of the bulkhead. Police found a backpack containing five striped bass belonging to the suspects. They found another striped bass in the suspects’ vehicle. Police charged Elmer Antonio Villatoro Hernandez, 40, of Virginia; José Fermin Escobar Bonilla, 40, from Severn; Juan Villatoro Bonilla, 64, of Virginia; and Oscar Hernan Escobar Bonilla, 35, of Severn with trespassing on posted property. They risk up to $500 in fines, 90 days in jail and must appear in court. Jose Ignacio Mejia Cruz, 32, of Hyattsville and Luis Alberto Nativi, 41, of Virginia, were both charged with targeting striped bass in a spawning area, trespassing and using more two hooks per line. They face up to $2,500 in fines and 90 days in jail if found guilty.

A Washington County man has been charged with hunting in a safe zone and other charges. On May 2, officers were patrolling Clear Spring to investigate illegal hunting. According to police, they previously located whole kernel corn on a property and learned that Bernard Henson, 51, had slaughtered a turkey on the same property before they arrived. Henson showed police the blind ground where he was hunting. In the area, officers found black sunflower seeds and whole kernel corn on the ground near the blind. As a result, Henson was charged with hunting in a safe zone of the nearest residence – archery hunting in Washington County within 50 yards of an occupied building. Police also charged Henson with illegally taking or attempting to take wild turkey or black bear using bait. He faces a fine of up to $1,000 if found guilty. The turkey was seized and donated.

Police charged two Frederick men with hunting turkeys using bait, which is illegal in all seasons in Maryland. At 9:30 a.m. on April 29, officers conducted a check of private property in Myersville and observed two turkey hunters, Keith Brisbane, 55, and Aldo Branham, 59, actively hunting in the area. Police also located a battery-operated tripod feeder containing corn. If found guilty, they could each face up to $1,500 in fines.

Police have issued more than 100 charges against six marine workers in St. Mary’s County for multiple offenses. NRP has received information about alleged illegal activities at Nelson Seafood in Hollywood; officers monitored and investigated the facility throughout March. Officers observed three individuals engaging in illegal business activities related to oyster farming, including selling and harvesting while their licenses were suspended and revoked. Additionally, officers have reported observing false labeling information, misrepresentation of oysters, and the storage of oysters in an unlicensed refrigerated facility. The defendants were Caleb Hancock, 20; Andrew Nelson, 26; Robert Nelson Jr., 39; James Nelson, 45; Tyler Nelson, 19; and Melanie Wheeler, 43. Fines range from $350 to a maximum of $25,000 and up to one year in jail.

A Washington County man has been charged with hunting turkeys with bait and committing a firearms violation. On April 18, officers visited a property in Clear Spring owned by 65-year-old Steven Startzman. Police said they found kernel corn, which is typically used to attract turkeys, around a ground blind on the property. Police also learned that Startzman was hunting on his property with a shotgun capable of holding more than three rounds. In addition to receiving a charge for hunting wild turkeys using bait, Startzman received another charge for possession of an unplugged firearm. As a result, he faces a fine of up to $3,000. Police also gave him two warnings for failing to carry a hunting license and secondary identification.

A Wicomico County man is charged with illegally hunting a Canada goose. On April 16, police were informed that 19-year-old Jacob David Emmert had shot a goose that was nesting on a pond in Hebron earlier that evening. The next day, officers located Emmert in a vehicle traveling on Spring Hill Road and conducted a traffic stop. Emmert said on April 15 he was fishing at the pond and was attacked by a nesting goose, so he returned to his truck, pulled out his pellet gun and shot the goose. He then took pictures with the goose and in the nearby woods. He also admitted to returning to the same pond with a few friends to go fishing and tried to shoot another nesting goose but ended up missing. As a result, the police charged Emmert with hunting wild birds during the closed season. In addition, he risks up to $1,500 in fines.

The NRP has charged a Carroll County man with deer poaching after receiving a complaint about a pile of rotting deer carcasses. Officers responded to an area of ​​New Windsor on March 14 and observed six deceased males. As police investigated they were approached by John Wolohan, 22, who claimed the deer and said he had registered them with the DNR. However, officers found he had only recorded two antlered deer, at which point Wolohan claimed he thought they were females when he shot them, and recorded them as such . In Maryland, hunters can harvest two antlered deer, plus a bonus stamp. Wolohan was charged with hunting on property without written permission, exceeding the combined all-weather antler limit, overtaking a deer with less than 3 points exceeding 1 inch, and knowingly recording false information about the harvest. He faces a fine of up to $6,000.

The NRP charged a Wicomico County man with an outdoor fire that damaged two yards and a shed. On March 7, officers responded to a Salisbury residence in response to an unattended fire that had burned overnight during prohibited hours. Police say Bradley Bellacicco, 67, set the fire but did not have an open burning permit. The fire had spread from Bellacicco’s residence and crept within two feet of a neighbor’s residence, damaging both yards and setting fire to a small shed on Bellacicco’s residence, various trees in his yard and part of its neighbour’s wharf. Police have issued multiple charges against Bellacicco for improper open-air burning and he faces up to $2,000 in fines.

NRP officers have accused a Westminster man of spotlighting deer in Carroll County. On March 6, officers were notified that a truck had stopped alongside a road and the driver was shining a spotlight on a nearby pasture. The tipster added that two gunshots followed. During their investigation, police identified 18-year-old Michael Strine Jr. as being in the area at the time. Strine initially told police he hit a deer with his vehicle, but police located the deceased deer nearby with a gunshot wound and no blunt trauma. When confronted with this information, Strine admitted to shooting the deer from the cab of the truck and using a searchlight to find the deer. Officers charged him with having a loaded gun in a vehicle, shooting from the roadway and hunting at night. He faces a fine of up to $4,500 if found guilty.

Police have charged two Montgomery County men with poaching deer in Frederick County. On March 6, officers patrolling the Frederick Watershed Cooperative Wildlife Management Area observed Feddous Ahammad, 40, crouching behind a tree facing the pond. Ferdous raised his shotgun at an angle at ground level and fired towards the pond moments later. According to the police, they saw a bird in the pond wading after being hit. Suddenly they heard a volley of gunfire from Ahammad and Ashish Kumar Sarker, 41, across the pond. Both men told officers they were goose hunting, but police said neither had bought a Maryland Migratory Bird Stamp. Officers also discovered that Sarker’s 12-gauge shotgun was not hooked up as required. Police also identified the downed bird as a mallard, whose hunting season ended on January 31. Police seized the duck and accused the pair of hunting waterfowl during the closed season and hunting without a migratory bird pad. They both risk up to $3,000 in fines.