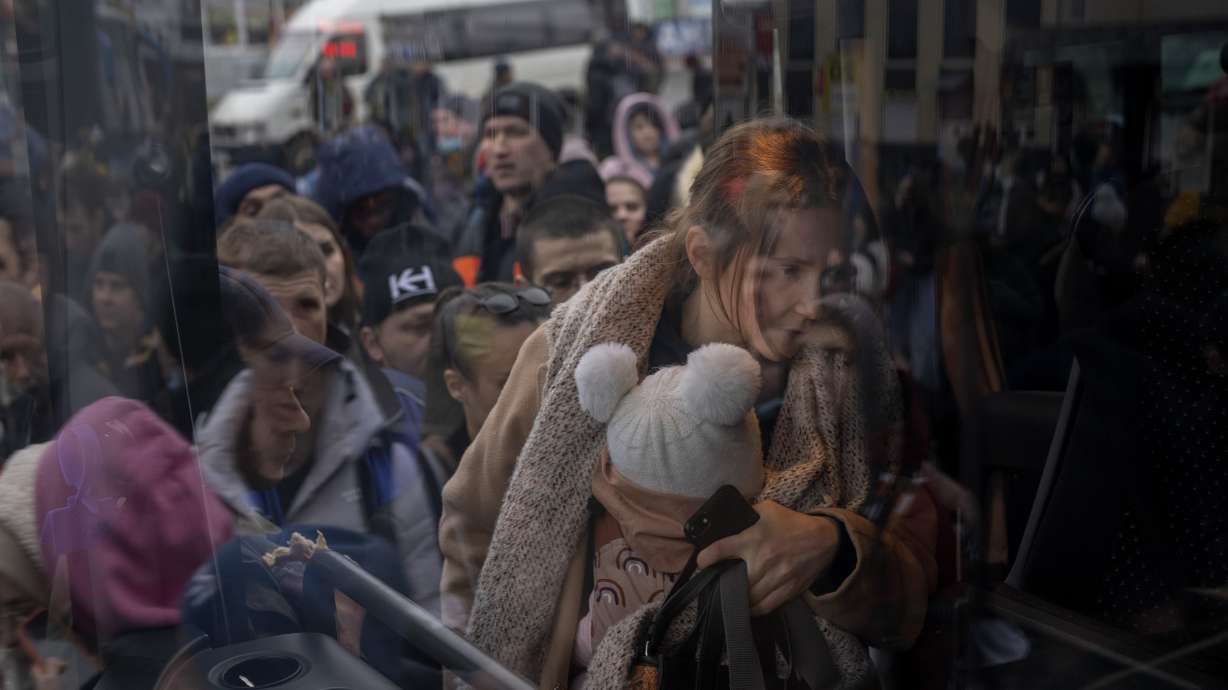 A woman holds her baby in her arms as she boards a bus leaving Kyiv, Ukraine on Thursday. A local organization is organizing help for Ukraine, giving Utahns and those with friends and family in Ukraine a way to help, halfway around the world. (Emilio Morenatti, Associated Press)

SALT LAKE CITY — A local organization is organizing help for Ukraine, giving Utahns and those with friends and family in Ukraine a way to help, halfway around the world.

The Ukrainian Association of Utah already coordinates humanitarian aid to Ukraine and aims to bring awareness of Ukrainian culture to the beehive state.

Eugene is part of this Ukrainian community and has lived in the United States since arriving in Utah in 1995 for college. He lives here now with his wife and 2 year old daughter, and Eugene’s mother and sister also live here.

But he explained that the rest of his family, including his father, aunts, uncles and cousins, all live in Mykolaiv, Ukraine, a town near Odessa and the Black Sea in the south of the country. .

Eugene visits every other year and flew away last summer with his wife and baby. Photos from the trip show a fun time visiting all of his relatives.

“It was hard to watch people die for no reason,” Eugene said, as tears welled up in his eyes. “This senseless war is so difficult.”

His father and extended family members are doing well at the moment, and Eugene hopes it stays that way. But being so far from his original home, Eugene feels helpless.

“Especially being in another country, where you can’t do anything personally to defend your country other than watching the news and maybe publishing articles,” he said.

Eugene is involved with the Ukrainian Association of Utah, an organization that wants to help bridge that divide by posting reputable resources and organizations that Utahns can donate to, as well as hosting a rally for people to get together. gather.

Eugene and his family plan to attend the #StandWithUkraine Action in Support of Ukraine rally on Saturday at the State Capitol.

“Just to tell the world that we are for peace and want this war to end, and whatever we can do,” Eugene said. “And it’s not just one nationality, Ukrainians, it’s all people coming together, Ukrainians and Russians, and just saying, ‘Enough is enough.'”

Eugene may be far from his family and the place he once called home, but he won’t have to defend the peace alone.

“I think it means a lot to me, to my family, and to our community, just to know that we’re not alone,” Eugene said. “That there are Americans and other nationalities who care about Ukrainian suffering and what they are going through.”

Action in Support of Ukraine, the #StandWithUkraine rally organized by the Ukrainian Association of Utah is scheduled for Saturday at the State Capitol from noon to 3 p.m.

The Ukrainian Association of Utah has also shared the names of places it considers worthy of donating*, with the following list:

“Donate to charities that directly help Ukraine and Ukrainians,” the Ukrainian Association of Utah wrote. “All charities listed are registered in the United States and are 501(c)(3) nonprofit organizations. Donations and gifts are tax-deductible to the fullest extent permitted by US regulations. IRS.”

*KSL.com does not guarantee that money deposited in the account will be applied for the benefit of the persons designated as beneficiaries. If you are considering a deposit into the Account, you should consult your own advisers and proceed otherwise at your own risk.

Slow internet on one computer

California Resources Co. (NYSE:CRC) will issue a quarterly dividend of $0.17